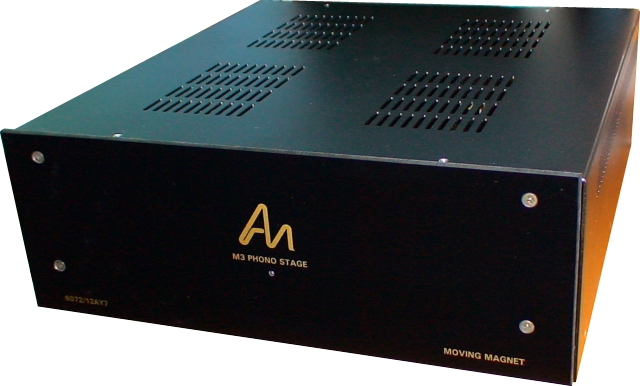 I built an AudioNote Kits MM-Phono Stage some time ago now and it provided me, once again, with a way of using a turntable with my system. I then purchased an Audio Note TT2 turntable, which took me to a new level of performance with the set-up. At that time, the combination's performance vastly outshone my digital set-up. However, I then built the AudioNote Kits DAC Kit 2.1 - this proved to be another dramatic improvement and leaped ahead - leaving my previously prized analog front-end sadly wanting. This was compounded when I built the Kit03 speakers, which managed to extract even more detail out of the sources. This was a bit of a mystery to me for a while because I had heard what my turntable set-up could do as I had heard it plugged in at the Hi-Fi show where I had picked it up. The amp being used was a Meishu with built-in phono. The amplification section is quite close to what I have myself so I suspected the quality of my phono section.

I mentioned my dilemma to Brian Smith at AudioNote Kits. He told me that he had been working on a new phono stage for that very same reason - although the MM-Phono Stage had been 'quite' good, it was not up to the same level as his other top of the range kits and was letting the side down somewhat. I had to find out more.

The new phono stage (the L3 Phono Stage Kit) uses the same circuit used in the famous Audio Note M3 finished product - a highly respected pre-amplifier. It uses two 6072 valves on its input; feeding an RIAA passive EQ circuit (which is said to be much more accurate than the board used in my previous phono stage kit). This then feeds into another 6072 output valve. The power supply is the now familiar M2 power supply (as used in the DAC Kit 2.1 and the MM-Phono Stage), which again is taken from Audio Note's finished product line.

So I decided to bite the bullet and order the new phono stage to replace my existing one. I saved some money by re-using the mains transformer and choke from the old phono stage.

The new phono stage is said to produce a very good and accurate version of the RIAA curve which is a very important task for any phono stage at least for playing records produced from 1952 onward).

The audio signal that is written to a vinyl disk has to be changed before it's grooves are cut into a disk. If it were left unchanged the low frequency bass energy would cause the grooves to be too big and cause either bleed onto the groove next to it or would mean the grooves would have to be spaced out at a much greater distance from each other - resulting in less time on the disk. This problem was recognised very early on in the history of vinyl records. The solution was to apply equalisation when cutting the master disk and applying an exact inverse equalisation when playing back.

In the early days, there was no fixed standard so different manufacturers applied a different curve to their recordings - resulting in unpredictable reproduction. This changed however in 1954 when the Recording Industry Association of America (hence RIAA) managed to establish a truly recognised standard.

As you can see above, bass is cut dramatically and treble boosted when cutting the disk. The direct opposite curve is then applied at play-back. This has several advantages and disadvantages.


The M3 phono circuit used here in the L3 phono stage recreates the RIAA curve passively. This means that it uses passive components. Some phono stages attempt to do this using active components (such as op amps etc) but these tend to introduce unwanted noise into the circuit.

I am a great fan of valves (tubes) for use as audio amplifiers. For many many years before the appearance of the transistor, valves were being designed specifically for audio use and were/are capable of very linear performances across the audible spectrum (and beyond).

Transistors are simply not capable of the same wideband behaviour as valves and results in the need for a number of (overlapping) transistors to be used often with various filters being used to emulate different frequency bands etc. This results in the use of a greater number of components being used - which is exactly what you want to avoid in an audio circuit because each component used will alter the sound somewhat.

Valves, therefore give rise to fewer components in the audio circuit that, in turn, allows you to spend your money on higher quality components. Topology of the circuit is also greatly simplified making it easier to understand a valve circuit.

Of course there are drawbacks to using valves. The main one is that high voltages are required.

The L3 Phono Stage Kit is available with many different options available.

The configuration that I decided upon was as follows:

For more information and pricing, please visit the AudioNoteKits.com website.

Note that although the L3 Phono Stage kit is specifically geared for Moving Magnet phono pick-ups, an external step-up transformer kit is now available from AudioNote Kits that is configurable for most Moving Coil pick-ups.

This is now my fifth kit ordered from AudioNote Kits so I knew that this was going to be a simple and painless process, as always. It is always best to discuss what you want with Brian Smith of AudioNote Kits before placing an order so that you are fully aware of all the options available to you as it appears that the kits are constantly being enhanced.

The kit took the usual 6 days to arrive in the UK from his base in Canada. Everything was very well packed for the journey (as I have come to expect) with no problems encountered.

One thing that isn't obvious about this board when you see pictures of it is that there are 4 large capacitors that are mounted under the phono board.

I enjoyed building the L3 Phono Stage Kit. I didn't come across any unexpected problems and found the quality of components, hardware, and manual to be very high.

You must of course judge for yourself whether you are capable of building this kit - that is one of the reasons I have included the build details on this site (see link at the bottom of the page).

The very first thing that struck me when I first listened to music on the L3 Phono Stage was the output level. It was now about the same as my DAC which is a good thing as it makes direct comparisons much easier - my old phono stage played at a much lower level. The second thing was how much better it sounded than my old phono stage - yes already, without any break-in! Better in every way in fact - I was most happy about this (as you can imagine).

This phono stage is also quieter than the older model - of course this can only be detected by turning up the volume to a nonsensical level with no music playing - but nevertheless it is good to know.

I always allow time for my newly built kits to break-in before I talk in any depth about how they sound. Break-in (or burn-in) is the process where components 'mature' while actively in-circuit. Some components (such as Black Gate capacitors) can take a great deal of time to sound their best, so drawing conclusions on such equipment too early can be rather unfair.

During the break-in period, however, the phono stage never disappointed; it just went from good to better and better. There were a few shifts in frequency emphasis, as you would expect during this time, but less extreme than expected - just gentle settling.

I have been listening to an extremely wide range of music and have to say that this phono stage is an outstanding performer.

In terms of individual frequency ranges, you have a wonderfully silky top-end, high resolution mid, and low but extremely well controlled bottom-end. The balance across the entire range is superb.

Perhaps it is this consistency across the range that makes it as musically involving as it is. I don't know for certain, but it most certainly is capable of pulling you into the music - whatever type you are listening to.

I thought it would be interesting to make some direct comparisons between the new phono stage and my DAC Kit 2.1 (which I rate very highly) as I have a number of albums that I also have on CD.

First up for this comparison was Joni Mitchell's Blue album. Although the DAC's rendition was perfectly satisfying and engaging, the extra headroom and dynamics from the acoustic instruments that were portrayed by the vinyl version rendered the CD flat and a bit lifeless by comparison. The album version is definitely more musically involving.

Next up a change of pace - Michael Jackson's Thriller album. Both versions are standard releases - not remixes or special pressings etc. Here, the vinyl version is much much more interesting, musical, and dynamic than the CD. So much so, in fact, that it sounds like a different performance - makes me wonder if digital was the worse thing that happened to Jackson. The detail that Quincy Jones put into the background sounds and instruments is almost lost in the digital rendition.

It was more than apparent now that sounds of individual instruments could be heard in much more detail on vinyl. This was also true when it came to conveying feeling through voice.

I continued such comparisons on many other albums (in fact I found it quite addictive). I found the same on all of them. The only exceptions were some albums that were badly implemented on one of the formats (mostly heavily compressed CD transfers that rendered any comparison grossly unfair).

At last I am happy with my vinyl set-up. The L3 Phono Stage kit has lived up to its promise; delivering high quality vinyl reproduction (despite being a kit).

It has now also overtaken my digital set-up. There are, of course a number of upgrades and modifications that I could make to the digital side of things to possibly re-address the balance but there are even more upgrades that I could make to my vinyl set-up (upgraded arm and cartridge just for starters) - making it unconquerable in the long term.

One thing is certain and that is that I won't be wanting to upgrade my phono stage for a very long time to come.

System at time of writing
You can view how this DAC was built by clicking on the link below. That will take you to the start page of the build process.