Surprisingly, I have only ever had two sets of hi-fi speakers. My first were a pair of KEF Concorde speakers. I can't really remember how long I had them but I knew even then the importance of efficient speakers.

Being a musician (back then anyway), I was then inspired by Tannoy dual-concentric speakers. My interest in Tannoys came from hanging around various studios in my band days - the Tannoys always sounded more musical than the JBL systems which always sounded too harsh in the treble area. I also had the opportunity of hearing some of the big hi-fi Tannoys being played in a shopping mall when the last of the real Manchester hi-fi shops went into decline and was taken over by Lasky's who didn't really know what to do with genuine hi-fi. I remember hearing Billy Cobham being played full blast through the best equipment they could put together. I simply had to have some after that. One problem - I couldn't afford that kind of money!

At that time, Wilmslow Audio carried Tannoy drivers. So I saved up and bought a couple of 15inch DC386 driver kits (DU386 drive units). These cost me £505 (Pounds Sterling) for the drivers and crossovers in 1985. A friend of mine (who also made by bass guitars) built the cabinets out of high-density chipboard. He wouldn't make them out of marine ply, which was my first choice, because he had just moved house and had to make them in his kitchen (to the dismay of his wife). For the same reason, he couldn't make the biggest cabinets so I ended up with Berkeley equivalents. The cabinets had to be finished off in a DIY manner because of lack of facilities so, they were covered with cork floor tiles.

Of course, my new speakers where miles apart from the KEF's which were then sold off.

In the last 20 years the speakers have been used for monitoring work (i.e. home studio applications) as well as being my hi-fi speakers. I have never felt that they have been worth replacing because upon every upgrade I have made to my system, they appear to have kept up with.

My main concern at the moment, however, is to do with reports that after about 10 years' use, the speakers should be re-coned because their surround starts to disintegrate. Although mine are still intact and sounding fine, the speaker surrounds are a little sticky which could be a first sign. I have found that Lockwood Audio do re-coning of these drivers. Of course, the problem that I face is having to send them off and doing without speakers for a while - would I survive the silence?

I was convinced for many years that the drivers were actually HPD's. The reason for this was that I was supplied with two manuals with the two speakers (as you would expect). However, they weren't the same manuals (although I had assumed that they were). It was only when I came to reproduce the manual for this site that I decided to drag both out to find which one would scan the best - it was only then that I discovered that one manual was for HPD's and the other (the one I had left on the shelf for many years) was for DC's. 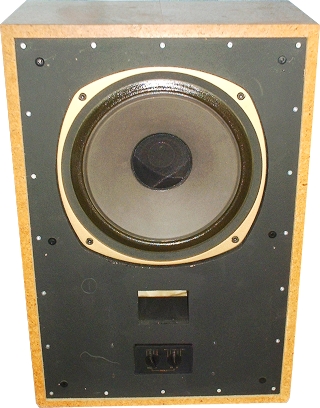 One of the speakers with the grill removed. 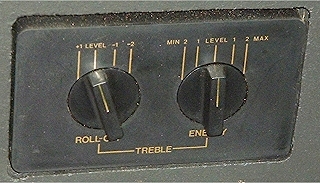 Roll-off and Energy controls. These are always set flat. 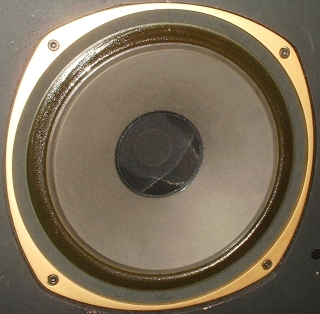 Tannoy Ltd have kindly given me permission to publish the manual which can be found in the Manuals section of this site.